Simple Summary: An Ideation thread on updating the current governance process and introducing a proposal lifecycle

The Euler DAO is looking to update its governance process and introduce a proposal lifecycle to ensure that proposals move smoothly from ideation to implementation in a trustless manner. And to allow the DAO to respond to emergencies without violating established governance processes or compromising decentralisation.

The Euler DAO is currently in a phase of development and is exploring its governance processes. Community members have been actively participating in discussions and decision-making regarding proposals. While there have been efforts to improve the execution of Euler governance through eIP 32 and the recent RFC for recognised delegates, the DAO still needs an explicit system for the lifecycle of proposals and a method for responding to emergencies. DAO has seen Many proposals moving through the forums needing to follow established guidelines adequately.

This ideation thread aims to determine the best way for a proposal to move from an idea to a formal proposal and an eIP, and to add checks and balances to the system to allow the DAO to quickly respond to emergencies without compromising decentralisation. This proposal combines information from various eIPs, forum posts, and documentation in one place and makes necessary changes.

This initiative strives to be the ideal example of an eIP following the designated lifecycle.

The community can contribute to the Potential RFC once this ideation thread gathers feedback [here].

The Euler DAO governance process takes place in the governance forum at https://forum.euler.finance.

Proposals are formally ratified through the Euler Improvement Proposal (eIPs). There are no requirements for participating in the Euler DAO discussion. Anyone can sign up for the Governance forum or Discord and engage in the conversation.

EGPs are standardised Proposals related to the DAO where any DAO member can participate in discussions, and the EUL token holders can vote.

Currently, The DAO has Euler Improvement Proposals (eIPs), which would facilitate protocol updates, Risk management of assets, and social proposals.

This Proposal also wants to establish different types of Proposals to distinguish between Executable on-chain proposals and Social proposals like treasury management, Grants or general DAO-level proposals that don’t have a clear on-chain implication.

Should we update types of Proposals

The Purpose of this phase is to gather a community sentiment on the idea of the author, Unique Ideas can use #idea tag on the forum and have its thread. Phase 0 proposals are generally ideated in informal settings like Discord chat or telegram group. This phase could include gathering community support on the specifications of a potential RFC with multiple in-text polls.

During this phase, proposal authors,e could ask for official community sentiment by formulating the Idea in a Request for Comment (RFC). RFC should follow the prescribed template [link to template].

During the draft stage of the RFC, the author shall include community feedback and update the proposal accordingly.

The purpose of the Draft RFC status is to gather adequate feedback and support to attain soft consensus, allowing us to proceed confidently with a formal proposal without the risk of it being immediately rejected.

After gathering sufficient community feedback, the proposal’s author formalised the proposal and did a temp check. The temp check of the finalised RFC should last seven days, and the author cannot make any changes other than minor grammatical corrections.

After completing Phase 1, the author can move an RFC to eIP, and a community moderator will assign the eIP a number. The author of the RFC can move the RFC to snapshot after 24h cool-off period.

The Snapshot votes should run for 7 days with the previously defined voting option in the eIP. Authors can add ‘Abstain’ as an option for voters who want to abstain from voting but don’t want to be penalised for abstaining.

Proposal Threshold: 500 EUL is needed to create a proposal

Quorum: 10K EUL has to participate

The proposal is a collection of previous eIPs like eIP 19, eIP 23, and already established guidelines like 7-day cooling off period for an RFC

Q: Should the poll be open to every forum member? isn’t this opening us Sybil attacks?

N: I believe the forum poll should be open to everyone, as anyone can participate in governance discussions. It is possible that an attacker could create multiple accounts in the forum to vote on their own proposal, known as a Sybil attack. However, the proposal would not likely be successful in token-based voting, which requires a higher financial stake. The community can also identify and filter out such Sybil attacks in the early stages.

According to the lifecycle mentioned earlier, a proposal needs a minimum of 15 days to move from Phase 1 to implementation; This 15-day period will cripple the DAO to react during times of emergency eg: eIP#36, eIP #31.

Even though both eIP36 and eIP31 were emergency proposals, eIP 31 was for updating wBTC price fees, and eIP36 was to fix a minor bug in one of the smart contracts. This raises the question of what should be considered emergency proposals and who should be proposing these proposals.

What is an emergency?

An emergency is an event that requires immediate attention from the DAO to prevent the loss of funds or a catastrophic impact on the Euler protocol. Such events require a prompt response to be effectively contained.

What elements should be considered as emergencies?

Who can propose these emergency proposals?

How to react to emergency

Proposal’s types
As I previously pointed out, Im not very fond of the general type. As an alternative, I could suggest the following structure:

PS. Thanks again for launching this discussion, hope I did bother everybody with too much text.

Hello, @0xBaer Thank you for starting this discussion. I’d want to elaborate on a few of the points you made.

I think option 2 is best, but I would remove the treasury management part.

Also, I would like to propose a restructuring of the Categories in the following way:

Each category would contain four subcategories:

Every parent category has subcategories that correspond to different stages of the proposal’s lifecycle. This structure was constructed on a test server and may be seen below. 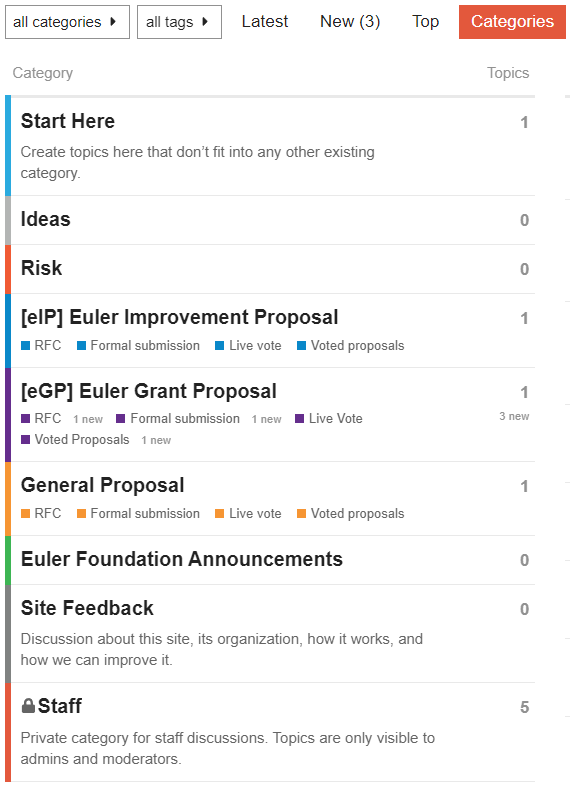 The formalisation of the governance process is very necessary element for clarity and DAO wide spreading.

What I wanna add about types of proposals, I’m more in favor of 2 options but with few changes:
Short abbreviations confuse a little bit.
I would propose:

As @Raslambek already raised the question, why should we raise Snapshot voting time? Or the same question is why should we decrease?
We already have some variation of Fast Track. 7 days may definitely increase number of participants, 5 days can harm. I’m more in favor of 7 days.

This is one hell of a post 0xBaer, thank you for it. Perhaps consider breaking these up into multiple posts in the future? Forum is bad UI to read 1) all of it and 2) respond to it. Either way good work.

I dislike voting twice on the same thing. I think it leads to voter apathy when voters are voting on non-binding votes. The demographic of voters voting on a forum is already so small. We are drafting a constitution here but amendments are only receiving 4 or 5 votes - it’s too few to claim legitimate representation.

I propose once the active / recognised delegate proposals are live they act as guardians of the ballot box. Once we reach some sort of consensus here I’ll expand this theory more clearly.

While I am all in favour of knowing exactly what does and doesn’t constitute an emergency, there should be some sort of 5th category that is totally unforeseen. While the 4 categories provided are of good value, in DeFi things are so complicated that something completely out of the blue can blindside you. Maybe include a 5th emergency type (act of god)?

I agree on those who are able to declare the emergency.

I think perhaps the third option (24hr discord poll) should be open to anyone seeking to declare an emergency.

Generally speaking, I’d say the emergency option requires an entirely different eIP. Thanks 0xBaer but honestly this is just too much stuff in one post. I really appreciate the work you’ve done here but engaging in each part meaningfully is complex - please simplify it a bit in the future!

I might be missing something, but why is it 7 days? Isn’t it 6 days voting time atm?

This post clarifies the currently established customs in the DAO, which aren’t written anywhere. Depending on community feedback, we can split it into different RFCs or have a consolidated one which would give us clarity in the documentation.

From the Polls above, there is a soft consensus on three proposals, but we couldn’t yet decide what those three types will be. If there are no further comments, i will take the liberty to do some ideation and present my biased option in the upcoming RFC.

Just to clarify, does it assume that the author should change the proposal based on the feedback received for his/her RFC? Or the RFC should not be changed (other than gramaticaly) since the very moment an RFC is posted? I would opt for the possibility to change it according to the DAO’s feedback.

This post allows RFC authors to edit their proposals and rightfully do so. But the RFC should not be edited if it’s finalised and formally submitted as a Poll. This is to avoid a situation where someone votes ‘YES’ on day 1 of formalisation to fund a project being surprised with a new set of changes to which he might not agree.

That being said the DAO isn’t getting that much engagement on polls, people would loose track if here are more rules than necessory. Simplifying this RFC/eIP process is a must IMO.

I might be missing something, but why is it 7 days? Isn’t it 6 days voting time atm?

you are not missing anything, there isn’t any documentation which i can find about the length of the snapshot voting period. Most of the proposals are 6 days. The standard length across many DAOs is 7 days, a standardisation of the voting period helps us, meta-governance groups, a lot as we also follow a democratic process before voting on proposals.
opening to discussions