Current EUL liquidity on Uniswap is very low, which brings potential risks to Euler users and discourages the entrance of new investors. This proposal suggests using treasury assets to provide liquidity to the EUL/ETH pool.

Euler uses the Uniswap v3 TWAP as the oracle to price the EUL tokens on the Euler protocol. If the liquidity in this pool is too low (~60K USD now), and the EUL debts are high enough (~3.2M USD now), it could become profitable for an attacker to manipulate the uniswap TWAP oracle to extract value from vaults that have EUL debts.

By having a higher liquidity on the pool, it becomes much more expensive to manipulate the oracle, making the attack economically unprofitable.

Another side effect of having higher liquidity is increasing the attractiveness of the EUL token itself, by attracting investors that would be otherwise discouraged by the lack of liquidity.

With the current Uniswap liquidity, it would cost an attacker ~$50K to increase the price of EUL by 10x: 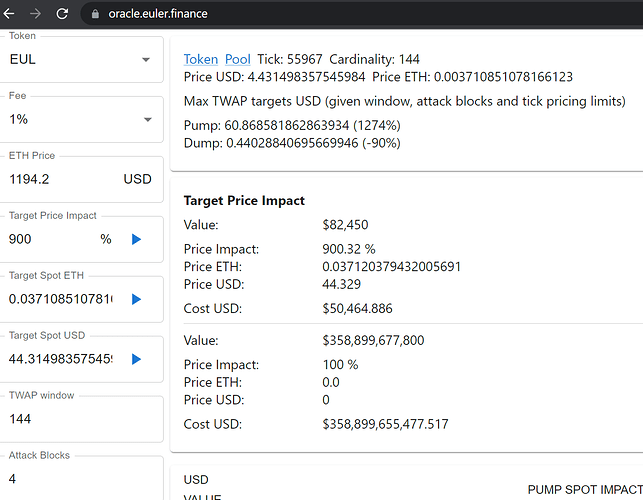 As the price need to stay elevated for several minutes for the attack to work, the total cost for the price manipulation could be higher (as people start selling their EUL to the pool) . This risk could be minimized if the attack starts at a time when blockchain activity is lower.

A potential attack could happen as follows:

If any vaults’ collateral are drained before their debts are payed back in full, the protocol would end up with bad debt. As this debt would be all in EUL (as it is in the “isolated tier”), it would be relatively easy to repay these debts using the treasury, but a potential compensation to the affected users could be much more expensive.

Use ETH and EUL from the treasury to provide liquidity to the EUL/ETH Uniswap pool. This liquidity would be owned directly by the protocol, and the swap fees would accrue back to the treasury. The LP positions would ideally be kept in a separated account controlled by the treasury. For reference, GMX keeps their liquidity in a dedicated account.

A suggestion for the price ranges/token amounts are as follow:

This would provide ~250K USD in ETH and EUL liquidity each, which is about half of what the uniswap pool had last month. The exact LP amounts/ranges could be changed by the team as prices and market conditions change, but inflows/outflows of tokens from the liquidity account should ideally be approved by the DAO.

Voting yes signals approval of the supply of liquidity from the treasury as suggested.

I would be inclined to go with a larger amount of both ETH and EUL and use this on uniswap v3 at full range and a 0.3% fee.
Potentially a $2m position in total. This would require the DAO to sell $1m of USDC to buy the ETH.

I see this as a form of diversification from the USDC heavy treasury and would be quite lucrative in terms of trading fees.

This position would not be set in stone and could be changed over time as liquidity improves from other venues.

Please note that big liquidity is against a protocol, not with it.
I’m ok to add liquidity, but not so much.

We have to find the balance between enough liquidity and too much liquidity, don’t forget we are in bear market and big guys can farm EUL with USDT and others, if they have the liquidity to dump it you can be sure that they will do.

Poiuwert your graphic is wrong, it cost more than 500k$ to increase the price by 10 at this moment.
That’s why i think 250k in total liquidity is by far the better option.

I propose to add to the proposal in relation to the liquidity problem a request for listing on binance from the team.

Whats best practice for this process. Will team have bandwidth to do this efficiently.

This is why we must not increase liquidity too much. 250k$ in total liquidity is already x5 compared to now, which I find more than enough or even too much.

Are you recommending full range like patria is saying above.

It should be full range and a minimum amount to improve the oracle’s strength.

im in support. should be full range on ETH/EUL, no opinion on fee tier. the amount should be <=250k though.

It should be full range and a minimum amount to improve the oracle’s strength.

I agree, I think $50k each side would be sufficient to achieve quite a significant improvement in the oracle security.

Fully agree with this

I would support the part dedicated to the oracle security improvement. Not being an expert in this matter, I tend to agree with Michael’s suggestion on 50k each side.

At the same time, I would prefer to exclude the part about raising investment attractiveness. I mean what is the benefit of making it more attractive to investors and consequently to traders? EUL is a governance token, so Im not sure that we need to encourage trading of it.

i think ready for voting, send it

I also see this as a way to strengthen the oracle, and therefore would prefer full range - also to avoid range management.

I suggest to use existing pool with 1% fee for now.

If we are supplying full range, we cannot supply equal USD amounts on both sides. Exact amounts depend on current price. I therefore suggest to supply 30000 EUL (ca. 129300 USD) and the amount of ETH necessary for full range liquidity. At current prices this would be around 42.1 ETH (ca. 50520 USD)

A recent snapshot vote for this RFC proposal has been taken down by admin: [RFC] Increase EUL liquidity on Uniswap due to a violation of governance rules.

Please give 7 days of community discussion for each RFC proposal before creating a Snapshot vote.

I’m in favor of adding more liquidity. Amounts can be adjusted by governance as necessary.

Regarding management, has anyone explored Arrakis for this yet?

not sure about actively managing a position - I think there’s a lot of complications and challenges here. But that aside I do support this - adding more liquidity on-chain should make it so EUL’s DEX volumes are dominant relative to CEX volumes - this goal makes sense. Also agree with points on accessibility, etc.

If there’s concern around farm and dump, which might be valid, I believe those should be addressed separately - in tokenomics design itself. Otherwise we’re implementing tokenomics based on assumptions of very thin on-chain liqudity, which is sub-optimal imo.

I think robust on-chain liquidity for token like EUL is a reasonable outcome to work towards and would bring more benefit than risk / cost to the protocol. It does seem we have more than enough treasury assets to start doing this as well.

You are missing a few details.